Showing posts from December, 2019
Show all

Why Is He Laying His Finger Aside Of His Nose? 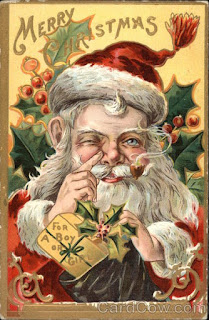 Most of us are familiar with the Christmas line, "laying his finger aside of his nose, and giving a nod, up the chimney he rose". So went St. Nicholas, aka Santa Claus, but what's with touching the nose? I recently found myself in possession of a mini gnome figurine holding a peculiar gesture that, really, looks as if he's about to pick a bogey! Wanting to know the meaning of touching the nose began to pick at my curiosity. This mysterious little gnome holds the distinct position of being about to touch his left forefinger to the side of his nose, a tap-of-the-nose-gesture quite a bit like the old tale tells of Santa in action. So what's with this nosy business; What does it mean to place a finger aside of the nose?  In body language and literature, throughout time nose touching seems to represent sniffing out the trouble of hidden things and/or smelling the truth of a situation, as in Santa Claus knowing if you've been bad or good... for goodness sake! Thi
Post a Comment
Read more
More posts